From www.wiki.ardumower.de
Jump to: navigation, search

A perimeter wire (or buried wire fence, BWF) is like a 'virtual fence': it stopps the robot when it reaches its boundaries. A perimeter is not always necessary for all surroundings.

Principle idea: You will install a perimeter loop (a wire) in your garden through which a signal is sent and this signal is detected by the robot. So, you'll need: a sender (to transmit the on the wire) and a receiver (to detect the signal in the robot).

How is the signal detected? The signal is detected by one receiver coils. The closer the distance between coil and perimeter loop, the higher the signal strength. Also, something interesting happens when the robot crosses the perimeter loop: the signal changes its polarity, that means positive and negative voltages reverse each other.

Here you can see the charging via charging station: 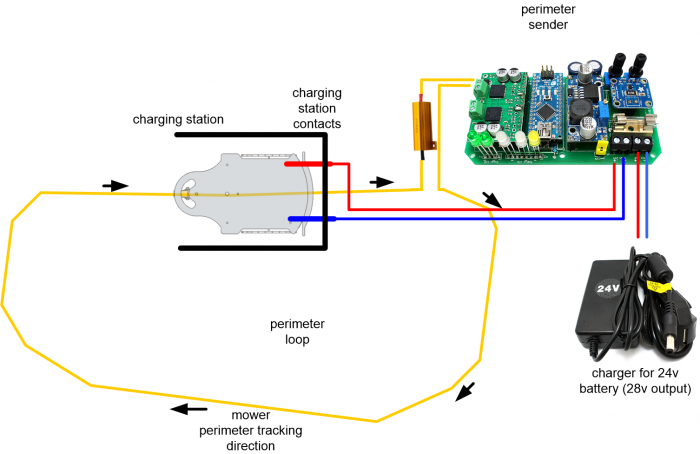 Required parts for a perimeter loop

A perimeter loop is optional but recommended.

The perimeter sender outputs a digital code sequence (a 'pseudo-noise' code), and the receiver will detect that code using a software-based digital matched filter. Depending on wheter the match result peak is positive or negative, the robot is inside or outside of the perimeter wire.

For a better understanding of the perimeter filter, see the Matched filter simulation. For more details about the filter, also see the Matched filter video. Using a simple symmetric signal (which looks equal on positive and negative side of the zero point), you cannot differentiate between an 'inside perimeter' and 'outside perimeter' signal. When the mower is traversing the perimeter loop, the signal polarity changes (positive becomes negative and negative becomes positive). We want to detect this polarity change of the signal. Using an unsymmetrical signal, you can do this. You can see the difference in the simulator. The default signal (slider 'example signal') is a symmetric signal - press the 'Invert' button to invert the signal (change its polarity). In the correlation result (graph 'Matched filter') the polarity can not be detected. Now use an asymmetrical signal ('pseudonoise5_pw'). Press again 'Invert' to change signal polarity. Now you can see polarity of the signal in the filter output (graph 'Matched filter'). It's the sign of the peak (positive or negative sign). 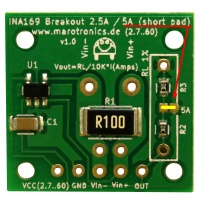 Note for Marotronics INA169: Short pads for 5A operation 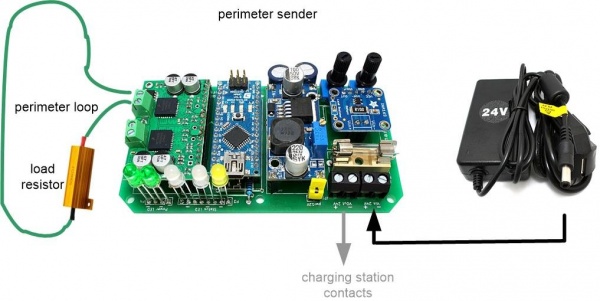 Click on the following link to go to the description: Soldering The Sender

NOTE: If you have never worked with Arduino before, read our 'Arduino first steps' introduction (it also contains useful information if your Arduino will not flash).

Arduino Version: It is very Importent that you use the Arduino IDE version 1.6.3 or above AND select the right Board (Nano).

To change the power (current/voltage) of the sender, proceed like this:

The consumed current and power is then:

The sender can be switched off during the time the robot is in the charging station. To detect the robot, a current sensor (INA169, 5A) is connected between the charger and the charging pins.

The perimeter sender status is indicated by the sender LED (Arduino Nano LED):

To find errors (or to better understand the sender), open the serial console via Arduino IDE (CTRL+SHIFT+M) at 19200 baud. Now you can see the possible states (robot in charging station, robot outside charging station etc.): 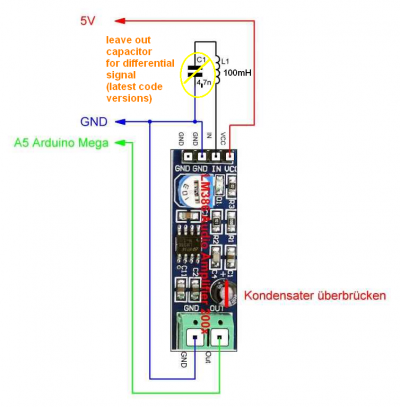 For receiving the signal, we use a coil (100 mH or 150 mH) in upright position (centered at front in robot) connected to an LM386 operational amplifier (to amplify the received signal). When using the LM386 module, capacitor C3 on the LM386 module should be bypassed (which is needed so that the LM386 generates a signal between 0..5V and not the default range -5V..+5V). The LM386 output pin should be connected to an analog Arduino pin ('pinPerimeterLeft').

You can get the receiver kit in the shop

NOTE: It's recommended to directly mount the coil on the amplifier module. This ensures the 'small signal' of the coil is not distorted by other components (motors, DC/DC converters etc.).

Ensure all minimum distances to the following components:

The sender / coil / LM386 amplifier outputs should look like this: (for more details about the signal, see section signal above)

Once in a while your perimeter wire may get broken, and your perimeter loop resistance will probably increase to a few Megaohms (MOhm). If that is the case, you can find the location of the break like this: